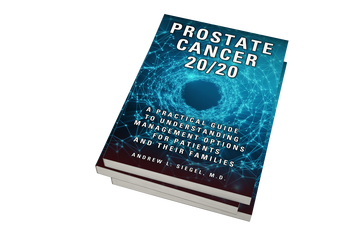 A doctor-turned-patient friend of mine who also happens to be a medical school professor stated it clearly: "As patients we often forget what we want to ask and forget what we were told."

One of my missions is to "bridge the gap" that exists between the medical community and the non-medical layperson.  This gap is best bridged by providing the education to complement and supplement the office visit, aspiring to answer the questions that were not asked and reinforce the answers to the questions that were asked, enabling informed decisions–after all, the word "doctor" stems from the Latin "docere," meaning teacher: "The best prescription is knowledge."

Prostate cancer is unique among tumors in that it exists in two forms: latent (evident on autopsy studies, but not causing an abnormal rectal exam or PSA (prostate specific antigen blood test), present in 60-70% of men older than 80; and clinically evident (causing an abnormal rectal exam and/or elevated PSA), affecting about 1 in 9 men in the U.S. Overall, men have a roughly 11% chance of being diagnosed with prostate cancer and a 3% chance of dying from it. This high ratio of prostate cancer occurrence rate to death rate suggests that many of these cancers do not threaten one's life and are "indolent" cancers.

African American men have the highest incidence of prostate cancer,1.6 times that of Caucasian men in the U.S.; furthermore, the death rate for African American men is 2.4 times higher than that of Caucasian men. On a worldwide basis, the greatest occurrence of prostate cancer is in North America and Scandinavia and the lowest in Asia. Prostate cancer is approximately 8 times more prevalent in Western countries than it is in Eastern countries.

Prostate cancer tends to run in families, so it is vital that male children of prostate cancer patients get checked annually starting at age 40 with a PSA blood test and a digital rectal exam of the prostate. (It is my belief that all men should receive an initial baseline PSA and digital rectal exam at age 40.)  Risk increases according to the number of affected family members (the more affected, the higher the risk), their degree of relatedness (brother and/or father affected confer a higher risk than cousin and/or uncle) and the age at which they were diagnosed (relatives of patients diagnosed younger than 55 years old are at highest risk). If you have a brother or a father with prostate cancer, your risk of developing it is doubled. If you have three family members with prostate cancer, or if the disease occurs in three generations in your family, or if two of your first-degree relatives have been diagnosed at an age younger than 55 years, you have a good likelihood for having hereditary prostate cancer, which confers a 50% risk of developing the disease.

My father, a retired urologist, was diagnosed with prostate cancer at age 65 and is currently 87 years old and thriving. I have been especially diligent in seeing my internist annually for a PSA blood test and a digital rectal exam of the prostate. Additionally, I have been proactive in taking finasteride to decrease my risk for prostate cancer.

An unhealthy lifestyle is an additional risk factor for prostate cancer.  Being overweight or obese and consuming a Western-style diet full of calorie-laden, nutritionally-empty selections (fast food, highly processed and refined foods, excessive sugars, etc.) puts one at greater risk for aggressive prostate cancer as well as dying from prostate cancer.  Asian men who reside in Asian countries have the lowest risk for prostate cancer; however, after migrating to Western countries, their risk increases substantially. This is highly suggestive that diet and other lifestyle factors play a strong role in the development of prostate cancer.

The good news is that when detected early, clinically significant prostate cancer is highly curable. However, such prostate cancers if left untreated have a slow, steady and predictable behavior with potential for local tumor progression and spread. Death from prostate cancer is unpleasant, often involving painful cancer spread to the spine and pelvis and not uncommonly kidney and bladder obstruction. Thus, early treatment is an important consideration for men with a life expectancy exceeding 10 years. When prostate cancer is treated, it is with the intent of avoiding the long-term consequences, i.e., that which might occur 10, 15 and 20 years down the line.  Even when prostate cancer is not discovered early, although not necessarily curable, it is most often a manageable condition.

I embrace the concept of the multi-disciplinary health care team approach to prostate cancer. In addition to the urologist, the physicians who specialize in prostate cancer are the radiation oncologist and the medical oncologist. This trio may be considered the prostate cancer team and are a powerful combination in terms of their ability to educate and guide management. Each member of the team has a different expertise and skillset and contributes vitally to the decision-making and management process.

Not surprisingly, physicians have inherent biases directly related to their training. In general, the urological surgeon's bias is towards favoring surgery, the radiation oncologist's is radiation therapy and the medical oncologist's is chemotherapy. I have made great efforts to get beyond my inherent surgical bias and to give honest and appropriate advice to my patients, based upon the "big picture." I strongly believe that all physicians should practice the FBSU test (Father, Brother, Son, Uncle test)—giving their patients the same advice they would give to their own family members.

Dr. Andrew Siegel is a physician and urological surgeon who is board-certified in urology as well as in female pelvic medicine and reconstructive surgery.  He is an Assistant Clinical Professor of Surgery at the Rutgers-New Jersey Medical School and is a Castle Connolly Top Doctor New York Metro Area, Inside Jersey Top Doctor and Inside Jersey Top Doctor for Women's Health.  He is a urologist at New Jersey Urology, the largest urology practice in the United States.

The content of this entry is excerpted from his new book, PROSTATE CANCER 20/20: A Practical Guide to Understanding Management Options for Patients and Their Families

Dr. Siegel is the author of 4 other books:

FINDING YOUR OWN FOUNTAIN OF YOUTH: The Essential Guide to Maximizing Health, Wellness, Fitness and Longevity

PROMISCUOUS EATING— Understanding and Ending Our Self-Destructive Relationship with Food

10 Reasons For Men to Kegel

Kegel Exercises: Get With The Program!

How to Order the PelvicRx® Program

The PelvicRx® includes an interactive DVD and digital access to all the training videos.